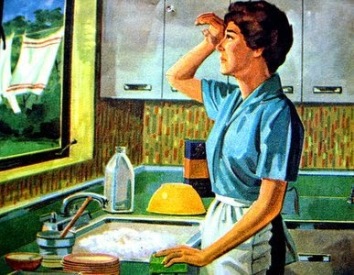 I’m concerned I may be developing Attention Deficit Disorder.  Does ADD only afflict children?  Some days my inability to remain focused runs me ragged.  Before I can accomplish an intended task, often before I even get started, something invariably distracts me, demanding my immediate attention. Today has been one of those days, and it all began with the phone book.

This morning on my way to the freezer to take out something for dinner, I stopped in the kitchen for a cup of coffee.  As I was taking my first sip, the phone rang.  It was my husband saying he would not be home for lunch, so I sat at the bar planning to leisurely have my coffee, thinking, Good, maybe I can get something done today.

That’s when the dryer buzzer sounded. Setting down my cup, I went into the laundry room to remove the clothes. You know how wrinkled they get.  How did that get here? I wondered, seeing the phonebook on top of the dryer. As I returned the book to its place beside the phone on the bar, I noticed how badly the living room needed vacuuming.  Heading to the closet to get the vacuum cleaner, I remembered that the disposable bag was full the last time I used it, and I needed to add bags to my grocery list.

In my office, I sat down at my desk to jot down a few other things we needed, and realized that it was the tenth—bill-paying day. I opened my checkbook and discovered that I had not balanced it last month.  Searching for the last bank statement, I glimpsed a chicken through the window.  Then three.  Looking closer I saw that they were all out, and pecking their way into the front yard!  Next thing they would be on the porch, and they make such a mess.

I hurried out to shoo them back to the henhouse where, sure enough, the gate stood wide open!   The storage-building door was also open. When I closed it, I saw the chaos inside!  Now, I know I did not leave it in that kind of mess. In fact, I had cleaned it up the last time I was in there.  Tools were scattered all over the floor!  I could hardly walk inside for the clutter.

Then I saw the garbage cans.  They had not been taken out to the road, and today was pickup day.  I had to go back to the house to get the key to the riding lawnmower, planning to hook up the little garden trailer to the mower in order to haul the garbage.  As I started up the back steps, I noticed the ants.

They had just about covered one end of the porch—they were everywhere!  Upon closer inspection, I noticed a cake crumb, and the ants had discovered it.  There must have been thousands of them, in a long black trail.  I needed to spray to keep them out of the house!

Back in the house, I reached under the sink for the Raid, just as the phone rang. Before I could get it, the answering machine picked up.  Whoever it was hung up, but that’s when I noticed my morning coffee sitting on the counter, cold of course.  I poured a glass of ice water, and stood there drinking thirstily, wondering what in the world I had come in there to get.  Then I remembered that I had not taken anything out of the freezer for supper.  Oh, the Raid. “Okay,” I said, “I’ll go spray those ants, and then I will take the meat out.”

Those ants were everywhere!  I sprayed and sprayed, until they lay dead all over the porch. Looked awful.  Better get the water hose—where is that spray nozzle? That makes me so mad, I fumed under my breath. That man!  He just refuses to put things back where they belong!

I dragged the hose to the back porch, and washed the dead ants away, along with other debris that had collected—dead leaves, and broken twigs from the tree that needed trimming, especially the long limb hanging over the back steps. I could reach it with my limb lopper, which I had seen on the floor in the storage building.  “I will go get that right now, I’ve had it with ducking under that limb! I’ll get rid of it once and for all!”

As I went around the corner of the house, I saw the spray nozzle lying on the air conditioner unit. I screwed the nozzle onto the water hose, and thought of the new rack I bought a few days ago for keeping the hoses neat and orderly.  It was still in the box in the backseat of my car.  I decided to attach it to the side of the house because the hoses looked so unsightly strung all over the yard.  Off I went to the garage to get the rack.

Of course, I needed a screwdriver. Back inside the house, I retrieved the tool from the drawer in the laundry room.  Oh, my laundry!  Getting all wrinkled!   I could not believe I had neglected it!  How had that happened?   I took the load to the bar and began folding—his stuff in one neatly stacked little pile and mine, in another. I glanced at the clock.  Almost three o’clock—why, it was already time for the garbage truck!

Where had the day gone? I postponed folding and grabbed the lawnmower key from the hook by the back door. That’s when I heard the garbage truck. I saw it as I started down the back steps.  “Shoot! Oh well, too late now,” I said.  Ducking to keep the limb from hitting me on the head, I climbed back up the steps.

Since I had waited too long to take the meat from the freezer, I began defrosting it in the microwave.   Annoyed, I waited for the pork chops to thaw.  What a wasted day!  Clothes half folded on the bar, living floor not vacuumed, supper not even started, bills not paid, check book unbalanced, grocery list not made, hoses all over the yard, tree needing trimming, storage room a mess, garbage not out.  I was standing there shaking my head when my husband came in.

“Well, what did you do today?” he asked.

“Hmmmm,” I said, reaching for the phone book to throw at him!
Anita Stubbs

My House of Many Rooms

I am a private person, but need a place to publish my writings, which have accumulated over the years.   I am in the autumn of my life, and feel the need to preserve some of what I have written in forms of poetry, short stories, and articles.  I have written one novel and now am working on my second one. I live quietly with my husband of 57 years, as of this coming November, in Texas.  My ancestors first came to Texas prior to the Civil War.  Other than the five or so years when we moved out of state, I have lived my life here. Anything more you may wish to know about me, you can hopefully gather from my writings, as far as my values, my character, and my impressions of humanity -- in as much and as far as I have experienced it, or imagined it. View all posts by My House of Many Rooms